History has a long tradition of being told through oral storytelling. Now you can get Canadian history as an audio curriculum, allowing you to sit and hear the events of Canada’s past, thanks to Headphone History.

Created by Canadian history enthusiast, Rowan Atkinson, Headphone History brings the story of Canada alive through sound and stories.  You can choose between a CD edition or a downloadable digital MP3, depending on your preference.

Volume 1 explores Origins to French Canada. It begins with information about the importance of studying history carefully – including the six historical critical thinking concepts that are recommended to be used for Canadian history. This volume contains 4 discs, running about an hour each. It starts the arrival of the first people to Canada, covering migration, the geography of the country, and settling of various Indigenous groups.  It gives very in-depth information about the Plateau, Plains, and Eastern Woodlands peoples – their lives, the foods they ate, their housing styles, their community activities, and their beliefs. Scattered in amongst the information presented are interjected stories and legends, such as Skywoman and Turtle Island and the story of the White Buffalo. From there, the story moves into the arrival of the Vikings to North America and eventually to the experiences of life in New France around the mid-1600s.

Alongside the audio program, you can also buy worksheets that correspond with the topics from the volume. These include activities such as colouring sheets and word searches, quizzes, copywork, maps, and more. The selection of activities means that it can be used with a variety of ages, allowing families to be able to include even their younger children as well as their older ones.

How we used it

My children don’t really do well with audio content at home. In the past, we’ve tried to use it for various learning endeavours and it would fail every time – kids fighting or running off and not listening to the content. What I have found works is to have a captive audience – a situation where they have to stay put. So, we picked the CD version and listened to it in the player while driving.  This gives us something to do while we are in the car, and has made some of our longer drives more entertaining. It has allowed us to have some conversations about what we are listening to and gives the kids a chance to ask questions or make comments.

I have printed out the worksheets and allow my kids to explore more about the topics covered in the audio recording at various times. It allows us to circle back to the things we heard and discuss them again, while doing some hands-on activities that really help my kids solidify.

Rowan as a narrator is very calm and peaceful. It’s pleasant to listen to her speak. It’s very clear and very easy to follow along.  I love how it starts at the very beginning, explaining how historians believe people arrived in North America, but I was also completely impressed that it covered the importance of examining carefully what we learn instead of just taking it at face value.

The pacing of the content is well done, blending well into the next with soft transitions. There is a lot of information given, which could easily be overwhelming, but it’s nicely broken up with some stories and legends. The inclusion of stories and legends to take facts and make them come more alive was a great touch. It varied the content and delivery, which keeps attention longer, and allows for more personalization of the moments in history.

I also really liked the fact that interspersed amongst the information of what was happening in Canada, there are other lessons being shared – such as what the reference of CE and BCE stand for, as well as what was happening at the same time in other places of the world. It’s really interesting to know how different the Canadian history timeline is compared to some of the other places in the world.

What could be better?

This program is really professionally done. However, we could see a few things that could make it even better.

Although there is a timestamped card in the package that outlines exactly the times each segment starts, it would be terrific to have each new topic begin at a new track point on the CD. That way, it would be easier to navigate to the section you want to begin at each time you listen. Right now, you have to fast forward to wherever you ended last. I think this could be a terrific way to make it easier on listeners. 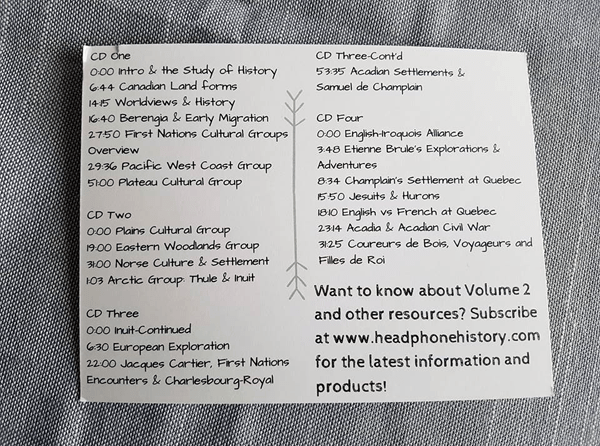 At the beginning of the CD, and scattered throughout (particularly at story intervals), there is an introduction done with music or sound effects like rushing water. Sometimes, these felt overpowering and loud, forcing us to turn down the volume until the speaking began again. It was nice to have a clear marker between the information and the stories though.

The only other issue we had was the cut off of the CD wasn’t marked. We were a little confused when it ended abruptly, followed by a long pause and the intro music began. It would have been nice to know we’d reached the end of the CD and sent over to the next one.

All in all, though, these are minor issues and something that hasn’t really taken away from the overall enjoyment of the program.

Headphone History is a terrific program for Canadian Audio History. If your children are audio learners, you like having learning on in the background, want another way to bring history into your house to go alongside with your lessons, or could use something intentionally to listen to in the car, this is a great fit. It’s a really unique way to bring history to life, and even as an adult, I’ve enjoyed being reminded of things I’d forgotten and things I didn’t even know. You can tell that Rowan is passionate about Canadian history, and has put this project together with lots of research. It’s a great addition to Canadian History education.

Disclosure: I was given a copy of Volume 1 in order to review this product. Everything in this post is our honest opinion and experience using this product.

1 thought on “Headphone History: An Audio History of Canada”