Canada actually didn’t have an official flag until 1964. Until then, the flag that mostly represented our country was the Canadian Red Ensign – a red background flag with the British Union Jack in the corner and a heraldry shield featuring 3 red maple leaves, and flags / symbols of the founding provinces. Interestingly, the debate around the design of the new Canadian flag was quite controversial and caused a lot of arguing among the parliament and also the people.

People all over had ideas on what the flag should look like. There were over 3500 submissions of designs sent in. The one thing that everyone seems to have agreed on is that it needed to have something that symbolized Canada.

Today’s challenge is to imagine that Canada is changing their flag. The government has called for your designs, so create your very own Canadian flag.

What will you include on it and why? How does your flag represent our country?

Flags incorporate colours to symbolize things, as well as patterns, shapes, and other symbols. Think of Japan’s flag: it’s a white background with a red circle in the middle. Why? That red circle represents a rising sun – which is what happens in the east (where Japan is!)

Your flag shouldn’t be so complicated that people can’t draw it. It’s also important to make your flag different from other countries so it doesn’t get confusing.0

My boys and I sat down and talked about what they thought should be on a new Canadian flag if we had to make a new one. They liked the maple leaf, and the red colour, but thought we should put something to show our French history on it too. Here is what we designed: 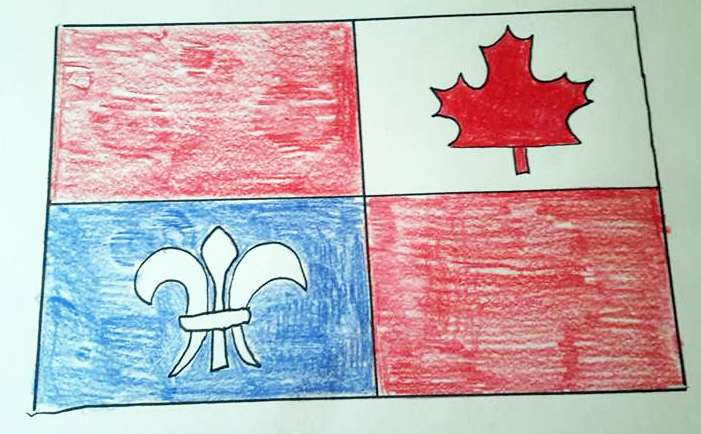 This flag includes red like the red ensign, the maple leaf, and the fleur-de-lis  – all things which are part of Canada. If we did it again, I think I would like to see something to represent our Indigenous peoples as well – maybe a feather?

What will you include?