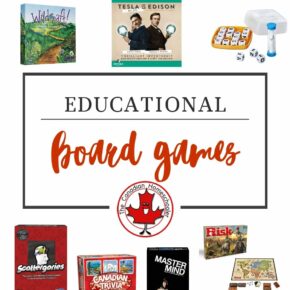 Board games aren’t just for fun. They offer a stimulating and engaging way to provide educational content to your day. Whether you want to introduce, review, or master skills – educational board games are a great way to sneak in some learning while spending quality time with your family.

Language Arts includes several different areas: letter recognition, phonics, spelling, grammar, literature, poetry, and more. There are educational board games for many of these, but word games in particular are popular – especially for family games. Here are a few to consider:

No list of board games for language arts would be complete without the mention of Scrabble. This classic board game focuses on spelling and vocabulary skills. Using the letters you have available, you create words in a crossword style – building off the words that both you and your opponent have been building on the board already. This is a great vocabulary builder. The classic edition is designed for ages 8+, but you can also get a Scrabble Junior which is suited for 5+, using a pre-printed word option or a plain board to build your own words. And, if you wanted – you can even get Scrabble Deluxe – French Edition to work on your second language skills.

Another close favourite is Bananagrams. It’s similar to Scrabble, however it’s not turn-based, it’s speed-based. Make your personal crossword style word board and whoever gets rid of their tiles first, wins! Besides, it comes in a super cute banana zipper case. My First Bananagrams which is especially designed for early learners ages 4+ and includes some pre-connected tiles in various combinations like double o’s and th. It comes in a green banana – which is adorable – and includes a list of other ways to use the tiles for learning.

Boggle has been around forever. I have fond memories of mastering my word skills with this game. In fact, I used to sit it on the corner of my desk in my room and look for a new word every time I walked by. The game consists of a grid of dice (4×4) that have letters instead of numbers. You shake their container until they arrange themselves in the slots and the challenge is to see how many words you can make with connecting letters within the time limit. After the timer ends, the person with the most words reads off their list and crosses out any matches with other players. Whoever has the most original words wins! Like the other games above, there are options such as a Boggle Jr for early learners and Big Boggle and even SUPER Big Boggle for people who want more of a challenge.

Another classic is Scattergories – where you roll a 20-sided dice to pick a letter and choose from a category to come up with a list of related things for that topic which start with the letter. For example, if you have the letter “C” and the category is “Things in a Kitchen” you might choose Cookies. The idea is to be creative with your ideas so that no one else will pick the same word.

Games for math typically focus on number recognition and skills such as addition, mulitplication, and sequencing. Here are some fun ones.

Although maybe not the typical thought for a board game, dominoes offer a great way to help kids with recognizing numbers by value instead of by numeral. You can also use the tiles outside the traditional game of matching tiles, dominoes also make terrific math manipulatives for early adding – simply by having to add up the dots on the tile (imagine the middle line is a + sign!) Never mind that they are a fun toy when you stand them up in a row and knock them down!

Smath is challenging. Think Scrabble – with math. You pick tiles and try to make math equations – crossword style. The tiles include the signs for adding, subtracting, multiplication, and division along with the numbers. A different way for math review!

Even if your kids learn nothing else from the classic card game of Cribbage – they will always remember the combination of numbers that add up to 15! You have to constantly use mental math throughout this game so it’s great for review. In order to play, you need the traditional race track board with pegs as well as a deck of cards.

Both Yahtzee and Farkle work on a similar premise: roll the dice, pick which ones to keep and which to roll again, and then add up your score. Although math is central to the game, it’s almost hidden under the guise of fun. They both work on developing probability skills as well – trying to decide where to drop your points because you are more likely to get a certain combination than others.

Although it might be the game that never ends, Monopoly teaches great skills in business sense, finance, strategy, and math skills like adding, subtracting and multiplication. It can be a very complicated game that takes a large chunk of time, but you can adapt it to your kids’ skill level. Of course, they also have Monopoly Jr. for younger players that focus more on the concepts of how we use money to pay for things such as entertainment. Plus, there are so many incredibly fun versions based on video games, TV shows/movies, local cities,

Science seems like a tricky topic for board games, but there are actually some pretty fun and creative games out there to help with learning science concepts – even for kids who are young.

If you want kids to start recognizing medicinal plants, check out the game Wildcraft. It’s a co-operative game (which means you work together for the goal instead of against each other.) Designed for kids ages 4+, you go on a journey to collect berries for Grandmother’s pie, only to have some challenges along the way which involve knowing which plants to use to solve them. It’s a unique way to approach game time and to appreciate that weeds aren’t just weeds.

The bulk of science games I recommend come from a company called Genius Games. They have created a whole collection of fun and engaging games which we love. For example, Periodic makes the periodic table into a game where you race around collecting elements to accomplish tasks. Subatomic has you build your own atoms out of neutrons, protons, and electrons. There are lots more biology and chemistry games, but they also have games like Ecosystem, which is a mini card game where you create your very own ecosystem with animals, rivers, and various insects. If you have science buffs, they might like trying out Tesla vs Edison Duel.

You can read our review of several of these games (and a few more).

Educational Board Games for History and Geography

There are tons of board games based on history and geography. It’s a subject that just naturally lends itself to games

Admittedly, I find it frustrating, but there are several people in my family that love the game of Risk. This game is about world domination using strategy and warfare tactics. You become very familiar with the continents of the world and understanding how wars work. It’s an interesting way to approach geography. And, my kids have always loved the little soldier figurines. I also just discovered there’s a whole new version which you can pair up with an Amazon Alexa which offers variations like dragons and shorter options.

This game takes you and your kids through time. Trekking Through History involves experiencing moments in history in chronological order. You have 3 12-hour game days to gather as many events and rewards as possible. You can earn points based on the cards you pick, the rewards that are given on each card, and also on your itinerary cards. It’s a fun way to learn about different things that have happened in the past. There are more than 100 cards to choose from.

The Saskatchewan Archaeological Society created a card game based around the fur trade. It’s called Trappers and Traders: A Fur Trade Card Game. You play with four teams. Ideally, the game recommends 2 people per team. Each is a different trading group: Metis, Hudson’s Bay Trading Company, First Nations, and the Northwest Trading Company. The items you have differ depending on which group you belong to. It’s a challenge to come up with what you consider a fair trade! You can read our review here.

Think you know Canada? Well, this one might stump you! It’s called Canadian Trivia: Family Edition. It’s recommended for players ages 9+, but be prepared for a lot of challenges together! Work your way across Canada from coast to coast by answering trivia questions about history, geography, arts, and general knowledge. There are two sets of questions: one for younger players and one for experts.

If you enjoy Monopoly, then you might want to check out the Monopoly: Travel World Tour version. Instead of properties, this game is a journey to destinations around the globe. When you claim a square, you charge tour fees to other players who visit. The whole board is a dry-erase board and the tokens are stamps! It’s a completely different way to explore geography!

Educational Board Games for Logic and Reasoning

Logic is one of the biggest skills that can be learned from board games. There are many, many options that I could add to this list for this category, but I’ll only add a few of the ones we enjoy.

Chess is a classic game of strategy and logic. It really involves a lot of skill and mastery to become a chess champion. Although not always a quick game, it does involve a lot of thinking and planning in order to beat your opponent. Boards can range from simple mats with traditional wooden figures, to folding tables for easy travel or storage, to incredibly detailed works of art made out of just about every kind of material. It just depends on how you want to play your game.

We enjoy playing a co-operative game called Forbidden Island. The main idea of the game is to gather all the artifacts from around the island before the whole place floods. It involves a lot of planning and communication in order to be successful. You are a team – and its important to remember that through the game because if you lose one player to the flood – you lose. Everyone has a role to play as you work through the plan to successfully get off the island together. It usually doesn’t take all that long to play – which is a bonus when you don’t need to fill up a whole day with a board game!

Mastermind is the ultimate strategy board game. One player creates a code out of four coloured dots and the other player’s job is to figure out what the code is. The first player gives some clues as to which of the dots are correct so the second player can guess again. But you only have ten guesses!

No matter what subject or lesson you are working on with your kids, they can pick up a ton of information through games. Gameschooling is the common term used for this method of learning. It’s fun, engaging, and provides a wonderful opportunity for you to spend quality time with your family. Just be careful not to make games seem like “school” or they might catch onto your learning plans! Enjoy the game together and see what they learn!

Do you have favourite educational board games for your family and homeschool? Share them in the comments.

3 thoughts on “Must-Try Educational Board Games For Your Family”