The fur trade was the original basis for the growth, foundation, and success of Canada’s beginning. Wealthy Europeans were eager to buy hats made of beaver fur and the supply here was plentiful. The demand lasted nearly 200 years.

Quality beaver pelts set the value of what things were worth and it seems that most trades were based on this value. For example, 1 beaver pelt could be traded for: coloured beads, gunpowder, a shirt, a set of knives, or even some sugar. It cost 11 beaver pelts to get a musket. Find out more about beaver pelts and what you could trade them for. 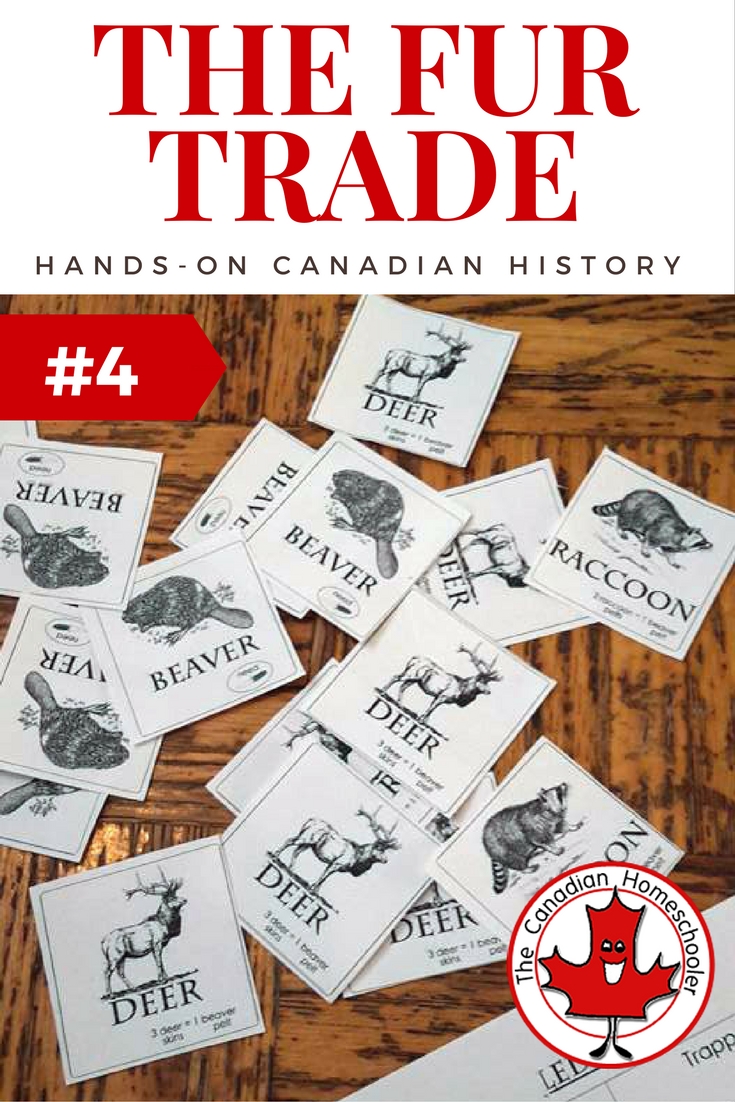 This printable game is based on the examples of how the trading system worked. Beaver pelts were the most sought-after fur of all the animals, but other furs were traded too.

The game is essentially a scavenger hunt, with one person being the shopkeeper and the others trappers out on the hunt. First, you print out the animal cards and ledgers – if you have several kids playing, you might consider making a double copy of the animals so they can hunt longer. Once they have all been cut out, the shopkeeper hides them all around the house before the game begins.

When the game starts, trappers head out hunting for animals. At first, all they can collect are deer and raccoons. 3 deer cards or 2 raccoon cards can be traded in to be equivalent to 1 beaver card. Trappers can choose to trade in 1 beaver pelt for a knife (allowing them to now collect beaver card), or 8 beaver pelts for a musket (that they can use to collect bears.) The goal of the game is to collect the most beaver pelt value.

The shopkeeper is in charge of using the ledgers to keep track of everyone’s furs. After all the cards have been collected (or all the ones you find during the game, because it’s likely you will find some stragglers after the game is over), the trading post totals up everyone’s card values, subtracting the cost of the weapons they’ve bought, to see who was the most successful.

This game was oodles of fun in our house, and all the kids participated – from Pre-K to Grade 7. It has also been used in classes, co-ops, and libraries all over Canada.

One interesting side lesson from this was having a great visual example of how prolific wildlife was when settlers first arrived and how soon it became sparse, demonstrating exactly how the fur trade really caused havoc and endangered the beaver.