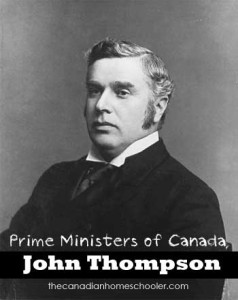 The fourth Prime Minister of Canada, John Thompson had been drawn into politics by Sir John A. Macdonald. After Sir John A’s death, Mr. Thompson chose not to be his successor, waiting until the seat became available after John Abbott’s term ended.

During his time in government, he was a key part of the structuring of Canada’s criminal code, and a supporter of women’s voting rights. His personal life holds a romantic story of secret love messages between him and his future wife, written in shorthand, since he was Protestant and she Catholic. Finally, her parents agreed to let them marry and he converted to Catholicism a few months after their wedding. The love letters continued.

His potential as a great Prime Minister for Canada was cut short when he died suddenly from a heart attack while in England. His time in office was a brief two years, and his name seems all but forgotten from the history books.

The Prime Ministers of Canada: John Thompson –  A brief intro, quick-facts, and biography of his life.

Biography of Sir John Thompson – from the National Film Board, a biography

Sir John Sparrow David Thompson – biography, facts, and interesting additional links, such as sample letters to his wife in shorthand.