As a homeschooling project, our family volunteered to help out with props and set design of our church’s production of Jesus Christ Superstar. Our pastor, the director, had graduated with a degree in theatre arts and our organist, an accomplished musician, was named musical director. The Board allotted several thousand dollars to the budget, so we were involved with a bona fide production, despite what those in the community thought of a “church” performance.

The pastor’s vision for this musical was one we shared: outreach to the poor, peace over war, community interconnectedness. At the first production meeting, we learned the show had not yet been cast. I encouraged my daughters to audition, and both were offered small roles. The show took the town by storm, selling out five performances in the 300-seat nave, each culminating in a raucous standing ovation.

Before our very eyes, while my husband and I painted sets and fashioned props out of hardware, our two homeschooled daughters fell in love with theatre. The result? A cascade of interest in the performing arts—a very inexpensive and fun way for a homeschooled child to gain confidence, develop public speaking skills, enhance their literacy and make friends.

Theatre groups typically present three or four shows a year, one in each season. Larger communities can attract enough young people for an all-youth production schedule, but smaller towns like ours select children for certain shows to round out the cast.

Audition notices are posted months before opening night. Community theatre organizations usually have their own websites or Facebook pages outlining audition information. Find out if your child needs to have an appointment or if it is a drop-in audition. For Jesus Christ Superstar, the girls waited in the church library with dozens of others, nervously waiting their turn.

The girls’ interest became so intense following Jesus Christ Superstar, that I drove them to a try-out a week later for Little Women, the Musical. The audition process varies from show to show and can be confusing and nerve-wracking. Some last five minutes (in and out) while others, especially if the director is looking to cast an ensemble, will be an hour long and done in groups, which was our experience for Little Women.

Preparation is the key. If your child is auditioning for a musical, they will be expected to sing portions of one or two songs, usually an up-tempo piece, and a ballad. We typed out lyrics to popular Broadway musicals and then sang along to karaoke versions on YouTube to prepare for auditions. Your child will not be expected to have a trained vibrato singing voice, but using a pitch pipe app helps to hit all the right notes.

A pianist may accompany your child (in which case you should bring the sheet music—try musicnotes.com), or the song can be sung a cappella (without instrumental accompaniment). If the director is interested in your child for a speaking part, they will give him or her a section of the script for a “cold read”. Familiarity with the script and role-playing beforehand with you as the director will ease the nerves here.

Both girls have been cast in all-youth and regular productions. Rehearsals are typically scheduled for two nights during the week and one day on the weekend, but this commitment is short-lived— just three months. Rehearsals run from one to three hours, scheduled in chunks, with the stage manager trying to arrange it so that scenes are rehearsed out of order to avoid downtime. In other words, your child will not likely have to wait around until they are called to the stage, but sometimes downtime is inevitable so encourage your child to bring a book.

The week before the show, the experience can be intense as the cast is busy with daily dress rehearsals and what is known as “tech” and “Q-2-Q” rehearsals. This is when the cast will stand on the stage while the lighting and sound crews develop their end of the show. Performance days are exciting especially if relatives are planning to attend the performance. Expect a few jitters. After the last show, all cast members participate in the strike—dissembling the set and clearing all items out of the theatre. A cast party will usually follow so this might be a late night (but worth it). Homeschoolers have the advantage here because they can perform in matinees and sleep in after an evening show without missing any school. When it is all over, it can be a bit crushing particularly if your child has developed strong connections with others in the cast.

Community theatre operates with minimal funding so don’t be surprised if the production team asks you to help with props or painting the set. This can act as the basis for a math lesson. My husband was challenged to construct graded platforms for a youth production. He used the opportunity to teach our girls about scale drawings using graph paper and then he recruited them to help paint the set (on top of being in the cast).

Art lessons came out of the blue. Fabricating a particular prop had us wandering around the hardware store imagining how window screen combined with tissue paper could be made to look like graffiti. Funds were low for that (youth) production, so both girls led a mask-making workshop for the young ensemble. 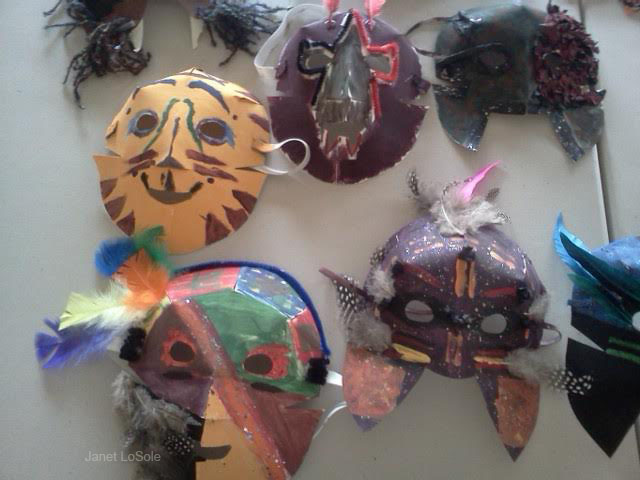 Our fifteen-year-old seemed to be inspired no end and erupted with ideas for costumes and headpieces. She came to me one afternoon and said, “We need to go shopping. I need a bike helmet, some margarine containers, cardboard, and paint. Let’s go!” This is what she created for one of her cast mates: 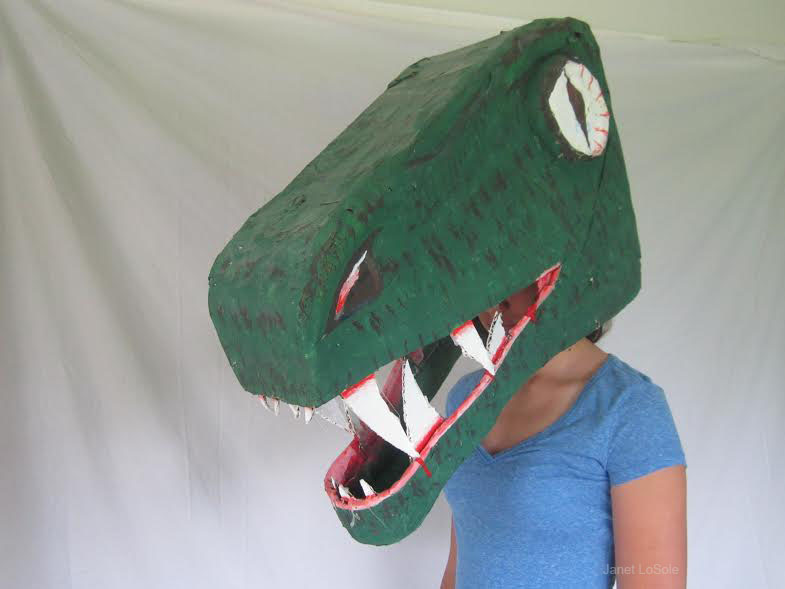 If your child is cast in a role in your local community theatre production, there may be a nominal insurance fee, but if they are cast a second or third time, this fee covers all shows in that season.

Our experience in theatre has taught the girls about cooperative work, being punctual and dependable and encouraging others to succeed.  Many discussions took place about the writing process (scripts look quite different from regular material); it seemed to jumpstart some inspirational writing—our oldest once re-wrote the entire first act of a play because she wanted to add a different element to it. But the most cherished outcome came unexpectedly for us, (perhaps not so for our pastor, an advocate for fostering community relations) was the intense, short-lived time together as cast and crew forged deep and long-lasting relationships with each other. Consider exploring community theatre projects in your area and see how your child blossoms.

Janet LoSole and her husband homeschool their two daughters with a focus on the arts. She was forced to buy another car to drive the homeschooled to auditions and rehearsals in neighbouring towns, but happily enjoys the hours waiting in the theatre to write.